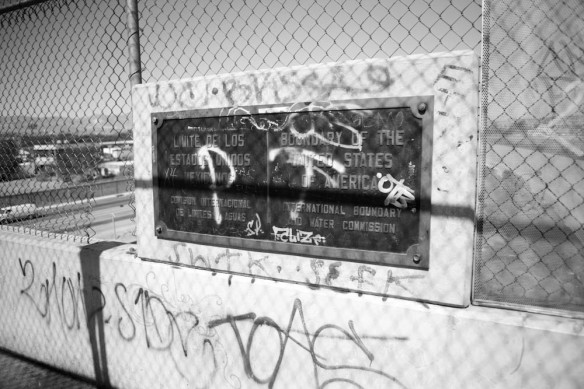 As I walked up to the pedestrian border crossing between El Paso Texas and Juarez Mexico alone yesterday morning I couldn’t help but contemplate my sanity.

It’s a long and lonely walk over the Rio Grande and not knowing what I’m about to face on the other side makes it even more lonely. Juarez Mexico is now crowned the most dangerous place on earth.

I wanted to be there for the final day of Javier Sicilia’s 7 day Peace March, Sicilia is a famous poet and journalist in Mexico and his son was murdered last March by the drug cartels. He was an innocent victim; in the wrong place at the wrong time, like so many others. I managed to connect and contact the right people, got myself a media pass and booked my flights to El Paso and was promised by the rally organizers and a local journalist they would take good care of me. And so they did.

I was late arriving in El Paso and missed my ride over the border with other members of the media, so I had no choice but to walk. I’ve crossed a lot of borders in my life, but this one has got to be the scariest one yet. You can literally feel and hear the tension and all eyes are on you as you are completely exposed walking across this desolate bridge.I knew after getting across I had quite a hike to the rally but I was not getting in a cab in Juarez Mexico, alone with thousands of dollars worth of camera equipment wrapped around my neck. While waiting in line to get my passport stamped and slightly starting to panic, I met a lovely woman who asked what I was doing in Juarez by myself. I told her I was covering Javier Sicilia’s Peace March but I was late. She immediately called over one of her employees and instructed him to drive me to the gate of the University where the Press conference was being held. Now reflecting back over the day’s events, this wasn’t the only time that I was in the right place at the right time.

From there I met another great person, Geraldo, or Jerry as he calls himself. We sat and chatted all afternoon, he lives in Juarez with his wife and son, who is the same age as my daughter and listening to his stories and his concerns and his hope for his city, really touched me. It’s a scary place, there’s no doubt about it, but I saw first hand, how life must go on. They don’t have a choice. The people of Juarez certainly live differently than us. They always have to look over their shoulder, they rarely go out after dark, they hear automatic gun fire randomly throughout the day, they can’t go to a bank machine or get into a cab without fear – but life goes on.

My new friend made sure I had a ride to the peace march held downtown at a monument so I wouldn’t have to take a cab or worse walk. We arrived at 5 o’clock at the downtown bridge to welcome hundreds of people who marched across the border from El Paso to show solidarity and support and once the bell on the truck that led the march began to ring in honor of those who have died, the most exciting peace march took over the main streets of Juarez.

I’ve seen Javier’s marches on youtube and on the news and in newspapers, but to be there was a life altering moment for me. You hear about the violence, you read about it, you feel for the people who suffer, but yesterday I got to touch it. I was witness first hand how evil can penetrate people’s souls. I heard of unspeakable things happening to someone’s son, daughter, dad or brother. It was shocking what these people have endured.

Over 5 thousand people showed up for this rally and I heard story after story of loved ones lost. One woman has lost all of her 4 children to the violence in Mexico. There are over a million people in the city of Juarez and I heard from a local yesterday that the newspaper once reported that every single citizen living in Juarez knows someone who has been murdered. Another newspaper headline read “How many people have you had to delete from your Facebook friends list?” -because they have been murdered. How gut wrenching and disturbing is that? 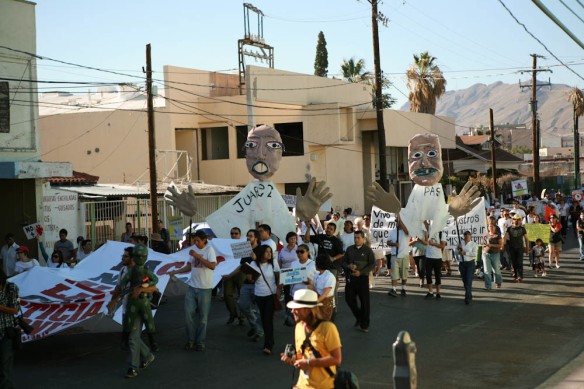 It’s hard for us to fathom such loss. I could feel how overwhelmed and desperate the people of Juarez are, but there was a blanket of peace that covered the city yesterday that let in a small glimmer of hope. No one heard gun fire, no one was afraid to hold up their signs saying No More Blood! We’ve had enough! Give us back our Mexico! Stop the Violence! They were proud to take a stand and awestruck at a chance to see their new hero in the flesh, Javier Sicilia.

It was well after dark when the rally ended and I was getting a little nervous as the bridge was quite far from where I was and I thought to myself, well you’ve made it this far…now what? But then… Jerry and his wife Karla appear and offered to not only drive me to the bridge, but they got out and walked me all the way across to U.S. customs. Those are the “real” people of Mexico. And as I passed through a stunned woman customs officer who was amazed that I went to Juarez alone, she said…..”You are a brave woman” , I smiled politely and said “Thank you, but not as brave as those people living over there.”