It’s official, the rooftop covers for all four schools in Mexico are done. The kids are over the moon happy and can play and learn and eat outside their 10 x 10 school rooms.

Last year our charity Hope For Mexico visited all four remote areas in northern Mexico to see for ourselves what these kids really needed most. We held a fundraiser, raised 15 thousand dollars and then got to work on making four schools a better place for these kindie kids to learn. With the money raised by all our friends and family here in Canada and Mexico we bought bags of “private school” quality school supplies, musical instruments and learning tools and delivered them personally last February. 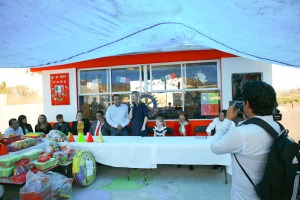 On the spot, working with the DIF, the government body that oversees the schools in Mexico, we realized these kids need shelter from the sun. They couldn’t play outside, or eat outside or learn outside because these playgrounds had no shelter from the blazing Mexican sun. Some of the kids were passing out and getting sick because they couldn’t find a reprieve.
We knew this is where our money needed to go. It took a lot longer than I had hoped – for reasons out of my control and nothing to do with the Mexican side of things, but here we are. Finally Done!! 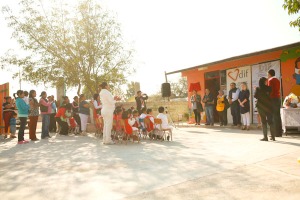 I will be travelling to Mexico in the next few weeks to tour each school and “officially” unveil the rooftop covers. Once again we will be accompanied by the Mayor of Dolores Hidalgo and the members of the DIF in that city as well. Both have been huge supporters of ours and we can’t thank them enough. 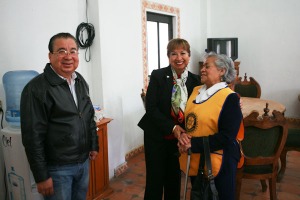 I would also like to thank a few people back here at home, who have weighed down my suitcase with supplies and support. My daughter’s dentist office, surprisingly handed me a big box of school supplies one day after they found out what our family is up to in Mexico. Thank you Danforth Children’s Dentistry. Also our friends Shelagh Meek and Stella Reed who so kindly bought school supplies for me to take back and Sue and Mike Stevens with another box of supplies and endless ideas for our fundraising efforts to continue. HFM’s new fundraising “idea” is actually Sue’s idea. Stay tuned, it’s going to be an interesting one. I know I’m missing people…so thank you to you too. And last, but certainly not least, thank you to Cesar, my brother from another mother who is on the ground in Mexico and takes care of all the details and ensures Hope For Mexico is moving along and takes care of me and my family when we are in our beloved Mexico. See you soon mi hermano!!